On Thursday, April 7th, students had the opportunity to attend the inaugural “Women in Public Service” Spring Reception. Virginia Law Women (“VLW”) and the Public Interest Law Association (“PILA”) sponsored the event, with the support of the Program in Law and Public Service and the Mortimer Caplin Public Service Center.

VLW President Casey T.S. Jonas decided to host the event after the success of the organization’s inaugural Women in Big Law reception last year. Women in Big Law, the brain-child of current 3L Virginia Blanton, “was an incredible event, and as someone public-interest minded, I immediately knew we had to have a complementary Women in Public Service event this year,” said Jonas.

The Women in Public Service event featured three panels on work-life balance, professional development, and private pathways to public service. In total, fourteen attorneys from a variety of different industries participated as panelists. Following the panels, there was a reception at which Jonas gave opening remarks and Dean-Elect Risa L. Goluboff spoke to the group. Women faculty and additional local attorneys were also in attendance.

Students who attended were enthusiastic about this inaugural event. “I thought the event was wonderful—it is certainly heartening to watch Virginia Law embrace two groups that are often underrepresented in law school settings: women and public service lawyers,” said Megan Keenan, a 1L. Keenan attended the “Private Pathways to Public Service” panel because she has interest in working in both the private and public sector. “For many of us law students who are uncertain exactly where we will begin our careers, it was comforting to know that these women felt enriched by both the private and public paths they had taken.”

Other students also enjoyed the “Private Pathways to Public Service” panel. 3L Morgan Lingar said the panel “provided a unique opportunity to learn about ways to successfully integrate work in both the public and private sectors into a career. This information was valuable in that it encouraged me to reflect on how each of what are often viewed as two distinct paths can add value to each other and to our own growth as attorneys dedicated to public service.”

Teresa Hepler, a 2L and the President of PILA, moderated the “Professional Development” panel. She said, “everyone who attended was so approachable and eager to share their experiences, and I found it so easy to ask questions and have discussions about career paths and obstacles along the way.” Hepler found the panel helpful. “It was important for me to see how confident these women were, and to hear their thoughts on how great it is not to really know where they would end up, but how each job they had and activity they did set them up for the future. The panelists basically said that there really weren’t mistakes in the process of finding your career path.”

Some of what Hepler learned during the event was unexpected. “One thing I learned that surprised me was when a public defender at the C’ville office told me that she had had no PD [public defender] experience before she got the job there. She had worked at a firm for years, and then was a stay-at-home mom for eight years. During those eight years, she did a ton of pro bono as a CASA [Court Appointed Special Advocates]. I hadn’t even considered that that track was a possibility, but it gave me something to consider for work-life balance when I become a mother.”

The third panel on work-life balance was also well received. “The work-life balance panel was a great addition to the event,” said Amber Strickland, a 2L and Co-President of the Law and Public Service Program Student Board. “Some might be tempted to think that a panel on work-life balance at a women’s event is just about children. But the panel covered so much more than raising children as a public interest lawyer. There was also great advice about how to set boundaries at work so that you don’t burn out and how to create time for the things you enjoy outside of the office.”

The attorneys who attended the event enjoyed it as well. “The attorneys I spoke to at the reception seemed really pleased to have been part of something that served women, and particularly women focused on public interest,” said Jonas.

“I always love coming back to UVA,” said Michelle Harrison, a 2012 UVA Law graduate and attorney at EarthRights International. “Hearing Dean-Elect Risa Goluboff speak at the Women in Public Service event and seeing how excited the students are about her and especially her support for public service lawyering was particularly inspiring for me. I am hopeful that her commitment to public service will bring about positive change at UVA. In particular, I hope it will mean a greater focus on enhancing the resources of the human rights program, and more broadly, I hope it will mean greater support for students who wish to pursue a more diverse range of public service careers.”

As for whether the student organizers want to continue this new tradition, Jonas said “Absolutely! I can’t wait to make it better. I’m also thinking about expanding the event to target all public interest-minded UVA Law students. Women continue to face unique obstacles in the legal field (and elsewhere), but given the obstacles everyone faces pursuing careers in public interest, it may make sense to make this event openly for everyone. It’s hard to figure out the balance!”

Whatever changes may be made to next year’s event, students will probably want to keep the catering: The bacon-wrapped dates were an absolute hit among all attendees. 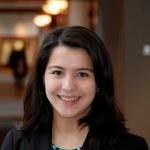 Lizzie Douglas is a 2L originally from the United Kingdom and who grew up in Massachusetts. She graduated from Haverford College and worked at a middle school in Boston prior to law school. When not studying, Lizzie is exploring Charlottesville one eatery at a time.